Fluvial Tones: An Audio Exploration of a Shifting Riverscape

This reflective paper considers Fluvial Tones, an 8.15 minute audio track, I created by combining field recordings of the River Lee (Cork, Ireland) with short excerpts from interviews to explore the waterway as a confluence of human-environment relations. Rivers are an acute example of the Anthropocene as natural systems that have been directly and indirectly altered by socio-economic actions over millennia. By deploying the unique capacities to sound to evoke reactions to places, Fluvial Tones is discussed as an aural artefact to experience the specifics of the case study, while also connecting to the (mis)uses of rivers more generally.

Fluvial Tones,1 an 8.15 minute audio track, blends field recordings with short excerpts from interviews to present the River Lee (Cork, Ireland) in an immersive form that indicates how the natural, cultural, and socio-economic overlap, grate, and merge in the flowing waters. I assembled the soundscape without commentary to enable the river and voices to speak for themselves, highlighting the watercourse’s agency, alongside appreciations for its (mis)uses. It is intended that the shifting resonances and character of the riverscape carry the listener downstream, while the perspectives of different people both complement and unsettle the journey. Ambient and underwater recordings are the connective spine of the piece offering a cacophony of the Lee’s sections and spaces while asserting the continuous movement regardless of inferences and interpretations. Different voices are overlaid to focus attention on how people understand and channel (see Figure 1) the river to serve human purposes. Fluvial Tones is a meeting place for the natural and the human, and the accompanying questions that occur at these confluences. 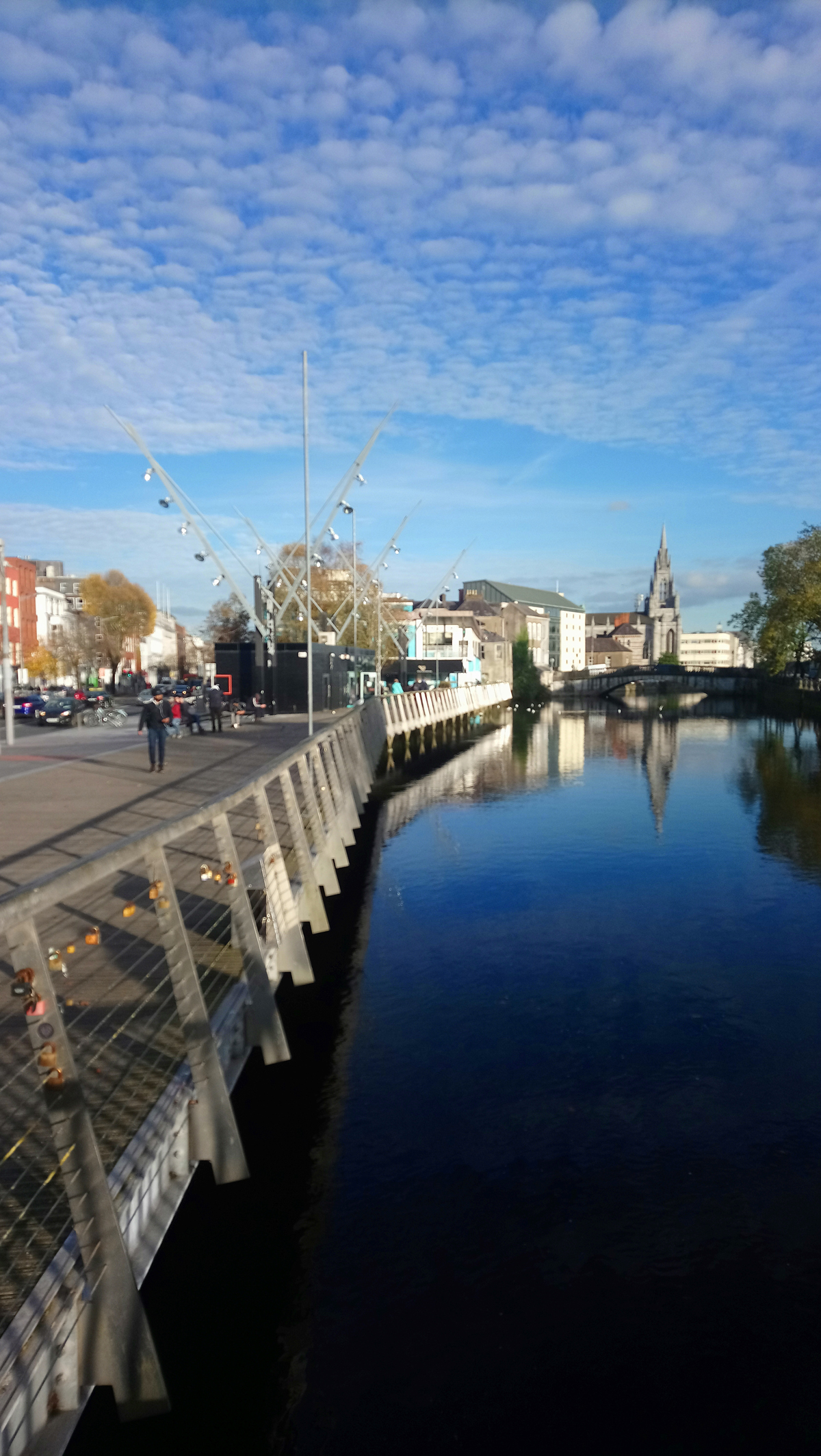 The south channel of the River Lee in Cork city; the former network of distributaries has been corralled and culverted into two main channels. Photo: Author.

As an audio piece, it deploys the distinct capacities of sound to convey meaning, atmospheres, and forces in an evocative and affective manner (see Lane & Carlyle 2013). Sound art emerged in the mid-twentieth century as a medium that centred on the sonic as a substance to be manipulated in generating new and impactful experiences for audiences (LaBelle 2015). While visual forms of creativity and knowledge imply a distance from the object providing tangibility and assumptions of accuracy, sound is illusive and ephemeral presenting a different form of understanding (Voegelin 2010). Audio artefacts demand attention, they draw the listener into a temporary space that is both enveloping and suited to considering a world in motion. More recently, natural and social scientists have turned to audio as a process to document, examine, and (re)present the world in standard and creative ways (Gallagher 2015; McDermott 2019; Paiva 2018). Audio objects can transport audiences to different locations in an experiential engagement (Williams 2019), while also enabling the voices of people to directly speak for themselves (Mills 2017). This sonic approach brings these capacities to considering the river.

Fluvial Tones responds to calls for creative engagements with the concept of the Anthropocene (Davis and Turpin 2015; Kunnas 2017; Latour 2014) and this journal’s facilitation of these conversations through its practices section. The piece is informed by recent appreciations for how sound can provide a fresh and impactful intervention in environmental and ecological considerations (see Barclay 2019). Different forms of ecological sound art and acoustic ecology present ways for expert and amateur audiences to engage not only with specific areas but also with more abstract issues, such as pollution and climate change (Deichmann et al. 2018; Farina and Gage 2017; Gilmurray 2017). Acoustic monitoring for rivers, for example, is increasingly being deployed as a tool to measure and monitor biodiversity in these systems (Risch and Parks 2017). The incorporation of people talking about the river help establish how ‘understandings of anthropogenic environmental transformation have been (and remain) entangled with the historical legacy of our social, political, and cultural worlds’ (Kelly 2017: 2). This approach aligns with posthuman methods that reconfigure examinations and representations of the natural world and other species in the Anthropocene (Ulmer 2017; Adams 2019). An artistic deployment of sound enables new ways of approaching and appreciating river systems.

Rivers are a distinct example of the Anthropocene. As a key component of ecological and geomorphological systems, rivers have been affected by human activities along with other natural processes (Williams et al. 2014). Originally, humans adjusted to rivers; they were foundational for settlement and transportation shaping how our ancestors lived and developed socio-economically. Across millennia the scales gradually tipped as we forded, channelled, culverted, dammed and polluted rivers, bending them to our priorities. Skalak et al. (2013: 51) highlight how ‘One of the greatest modifications of the fluvial landscape in the Anthropocene is the construction of dams’ which ‘have had a dramatic effect on river form and function.’ However, dams’ inherent fluidity results in human-fluvial relations that ebb and flow, as attempts to control and direct are overwhelmed and circumvented by water, prompting further interventions to be undermined. These interactions occur within the meta-context of climate change which has generated more extreme weather patterns that has caused more attempts to manage watercourses (Hirabayashi et al. 2013; Schneider et al. 2013). Rivers are a manifestation of the tensions at the meeting of the natural and hominid.

The River Lee encapsulates these strands as broader trends are embedded in a regional historical geography. Its 1,200 km2 basin incorporates over twenty tributaries, occupying the central part of County Cork as it travels west entering the Celtic Sea at Cork Harbour (Devoy 2005). Similar to many other cities, Cork, the largest metropolitan area in the south of Ireland, is founded on the lower section of the Lee amongst swampy estuarine islands and riverbanks. The city’s name derives from the Irish corcach, meaning a marsh, reflecting its riparian location and character. From the early modern period the expansion of the city was facilitated by the culverting and redirection of the river, but the largest human interference was in the construction of two hydroelectric dams in the 1950s which flooded extensive areas up-stream, including most of a submerged glacial woodland, called the Gearagh (McCarthy 2006; see Figure 2). In recent years, a proposed flood defence plan has brought renewed attention on the river and its role within the region, and has highlighted the need for greater public participation in decision-making around significant landscape features (English 2019; Jeffers 2020). 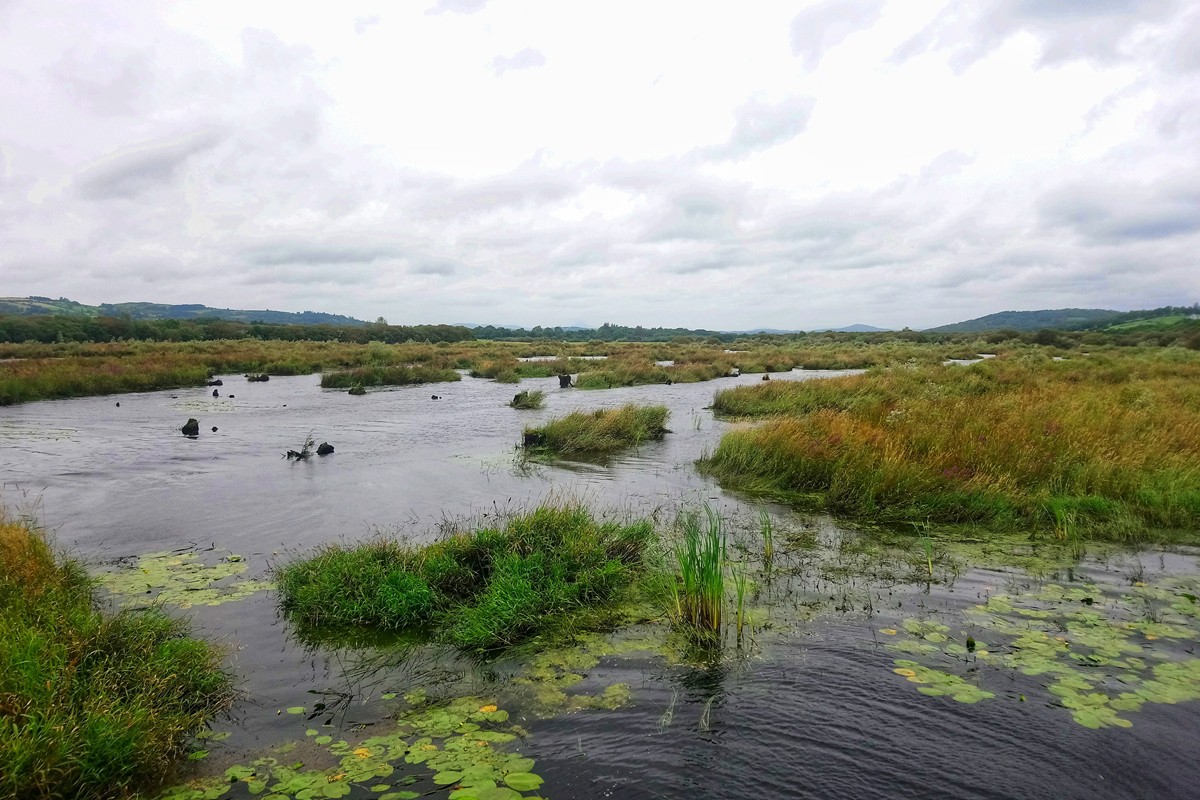 Remnants of the Gearagh: most of the glacial woodland was lost in the flooding of sections of the Lee valley with the construction of hydroelectric dams. Photo: Author.

Fluvial Tones emerged from these general and specific settings as a reflective piece both practically and aesthetically focused on the river. Field recordings carry the listener directly into the waterway through the sensory richness of ambient and underwater perspectives. As with sound art more generally, the most affective experience would be to engage with the track without distractions, perhaps in a darkened or quiet location. It invites a dwelling in the space (furthered through re-listening) enabling new understandings of the Lee as more than a landscape feature through its changing qualities and moods. The abstractions of human-environment relations and river management processes are replaced by a visceral encounter with the Lee as an active, varied, and affecting force. This approach disrupts romaniticised versions of flowing water as a solely calming element highlighting not only the different range of sounds encountered, but also conveying the often-silent elements, such as habitat loss or neglect. Sound is the connective medium that entices new appreciations of the river, its agency, and the realities of its course and composition.

Seven interview clips are intermixed to enhance understanding of the field recordings by emphasising different cultural and social valuations of the Lee. It is articulated as a constant presence in the history of Cork, as a rich habitat, as a recreational space, and as a source of cultural and natural heritage. An accumulation of meaning is generated as the track progresses with each clip adding a different interpretation that merges with the flowing waters. The interview excerpts also serve to erode artificial human-nature dichotomies by showing how the river is respected as an important part of communal and individual living. Moreover, the speakers, and their positions, are not identified in the piece to enable greater focus on their words and meaning (although they are acknowledged at the end). Voices and sounds merge to form the one strand concerned solely with the river. This approach is informed by posthuman methodologies that challenge the means of framing and interrogating environmental considerations by rearranging the interconnected positions of natural systems, different species, and humans (as a diverse and unequal group in itself) (see Ulmer 2017). My intermixing of the field recordings and unnamed interview sections binds these elements in a reciprocal process. Short and disembodied clips underline the centrality of the river soundscape; it is a constant beneath and surrounding the human interpretations flowing regardless.

Fluvial Tones’ purpose lies in prompting new encounters with and appreciations for rivers through the distinct capacities of audio (see Farina and Gage 2017). As a form of sound art, it is a provocation rather than a conclusion. My assembling field recordings and interview excerpts offers an insight into the river Lee that can challenge, refract, or enhance appreciation for this watercourse and others; however, it also calls for further consideration. This reflective paper contributes to that sentiment by expanding on my motivations in creating the piece to highlight the river’s agency through sound as a sensory impactful tool. Examinations and discussions of rivers need to include a respect for these features as natural forces and habitats, alongside a holistic consideration for how socio-economic processes have and will affect them into the future, both in terms of specific interventions and larger environmental contexts. The paper also contributes to the need for cultural perspectives and diverse voices to add to understandings of humanity’s ongoing reorganising of global and local natural systems (Dalby 2016). It highlights the role of artistic practices (Davis & Turpin 2015) and environmental humanities in examining and understanding the Anthropocene (Neimanis, Åsberg, & Hedrén 2015). We have a moral obligation to deploy all our disciplines and creative energies to appreciate and mitigate humanity’s impact on the environment. Fluvial Tones acts as a register to consider the river in new ways while also encouraging broader reflection on how we understand and treat the natural world in the Anthropocene.

Dr Richard Scriven is a social and cultural geographer whose works examines the intersections of cultural heritage, tourism, sustainability, and creativity through human-environmental relations. He lectures in geography at University College Cork.

McCarthy, K. ( 2006). In the Steps of St FinBarre: Voices and Memories of the Lee Valley. Dunlin: Nonsuch Publishing.

This article has no summary